Wave-off ceremony at the Hilton Hotel, we drive along the Tel-Aviv Promenade, Jaffa, then exit to the coastal road ‘4’. Driving along road ‘4’ towards the western Negev Desert, we will make our way to the south driving through the North Negev rural areas, Arriving in the city of Sderot we will have a lunch stop at Sapir Academic College, where we will meet some of the students for a short scholarship ceremony. Exiting Sderot, taking the ancient Western Negev Wine Route, we arrive at the sight of Ben Guriun’s (Israel founding father and first Prime Minister) grave sight. After a short visit and a scenic lookout, we will finish the day at Beresheet Spa Hotel, overlooking the Great Crater, at Mitzpe Ramon.

Departing Beresheet Hotel, we drive to the floor of the Great Crater. We then enjoy a magnificent drive south through the Negev and the Arava Deserts, along the winding roads to the southernmost city in Israel, Eilat. We will stop for a long, leisurely lunch, on the shores of the Red Sea. From Eilat we will be heading north to Timna Park, located some 25 km (about 17 miles) north of Eilat, A site that combines breathtaking natural beauty with history. Following our visit to Timna Park we will head north back to Beresheet
Hotel, climbing the winding roads of the Great Crater.

Departing the Beresheet Hotel we shall drive north towards Arad, via the city of Yeroham, then the Large Crater, through the crater’s wonderful winding roads. Watch for the mesmerising sight of the Zeppelin blimps parked on the side of the road… more on that later ;-). Arriving at Arad, we will stop for a coffee break at a very special site. Neradim Village – A permanent home for children who have been evacuated from their homes, proving a warm family environment and at the same time, working to integrate them into educational institutions in the city of Arad and ultimately, Israeli Society. Exiting Nerdaim Village and the city of Arad, we drop towards the Sea Sea, through a winding 1 mile elevation drop via curves and twists, meeting the Dead Sea at what is traditionally considered the site of Sodom and Gomorrah. Continuing on winding roads along the shores of the Dead Sea we will drive towards our Dead Sea stop where the cars shall be allowed to park as close to the Dead Sea waters as possible, we arrive at literally the lowest spot on the planet! Lunch will be served on the dead sea shore. Bring your bathing suit!
From the shores of the Dead Sea we shall climb towards Jerusalem through its ancient eastern access , and spend the night at the Waldorf Astoria hotel.

An early wake up into the likely frosty Jeruslem morning, we get into our cars and drive -slowly- through the Jaffa Gate into the old city of Jerusalem. Bring your cameras and smiles! Exiting the gates of the old city, we drive through Jerusalem’s old neighbourhoods, to depart Jerusalem via picturesque Ein Karem Village. Once we are past Ein Karem, we are in for an exhilarating drive through the winding hills of the Jerusalem region. Keep your pace up and you will enjoy world-class scenic driving. Exiting the Jerusalem Hills just outside Beit Semesh, we drive West and enter the coastal plain once more, briefly driving on the main road connecting Tel-Aviv to Jerusalem (road ‘1’) we arrive at a festive gathering for Cars and Coffee with the Israeli Classic car club (the ‘5’ club). Expect enthusiastic and friendly crowds, we have been
told that some have waited 3 years for this gathering! Waving goodbye to the gathering, we drive North on the “Cross Israel Highway” (road ‘6’). This is a great opportunity to stretch your legs! We exit road 6, at the mouth of the Jazraeel Valley, drop through scenic tree lined roads, right passed Megiddo (yes, the biblical sight of “Armageddon”, but don’t be worried, we have you covered). Cutting through the Vally we enter the Lower Galilee region. A short drive and we see the Sea of Galilee open in front of us from the top of the escarpment. A twisting road takes us to the shores of the Lake (some call it “sea”?), and our lunch stop at a picturesque location on the waters. Post lunch its a quick drive to the brand new Satai Spa Hotel, on
the eastern shores of the Sea of Galilee.

Another early wake up (gratefully not as early as the previous day). We fire up the cars on the northernmost point of the rally. On our way to the Golan Heights we stop at the famous Church of the Bread and Fish at Cupernaum. We then start our climb to the peak of the Golan Heights, the roads are breathtaking and remarkably user friendly. Reaching our early lunch stop at Merom Golan, the views are uplifting on a clear day, not to mention this remarkably strategic point. Post lunch, our route takes us south across the Golan Heights enjoying open roads and big sky. The roads are so much fun, that the Top Gear trio unanimously agreed that it is one of the best roads in the world (with Clarkson proclaiming on camera that he “wanted to have its baby” – but that’s another story for another day…). We park our cars at the exquisite Chateau Golan winery for a late afternoon tour of the winery followed by our tour’s closing dinner. Post dinner, in the early evening, we drive back to the Satai Hotel.

Departing the Setai, we head north once more, then west towards the Upper Galilee region. Driving the roads as we cross the tip of the country east to west, expect remarkable driving. We meet the Mediterranean Sea once more, and drive south along the coastal road ‘2’, towards Acre then Haifa. Climbing the Carmel mountains just behind Haifa, we rise then drop across the maintains, to the coastal highway ‘2’. Arriving to Caesarea for our lunch stop, at the old Sea port (when we say old we mean – Byzantine/Roman old!), we will lunch on the shores of the Med surrounded by endless Archeology sites. With lunch over, we head to Tel-Aviv.
Congratulations, the 2nd HolyLand 1000 tour is completed, 6 days and 1000 miles, and a million smiles. See you on the next one. 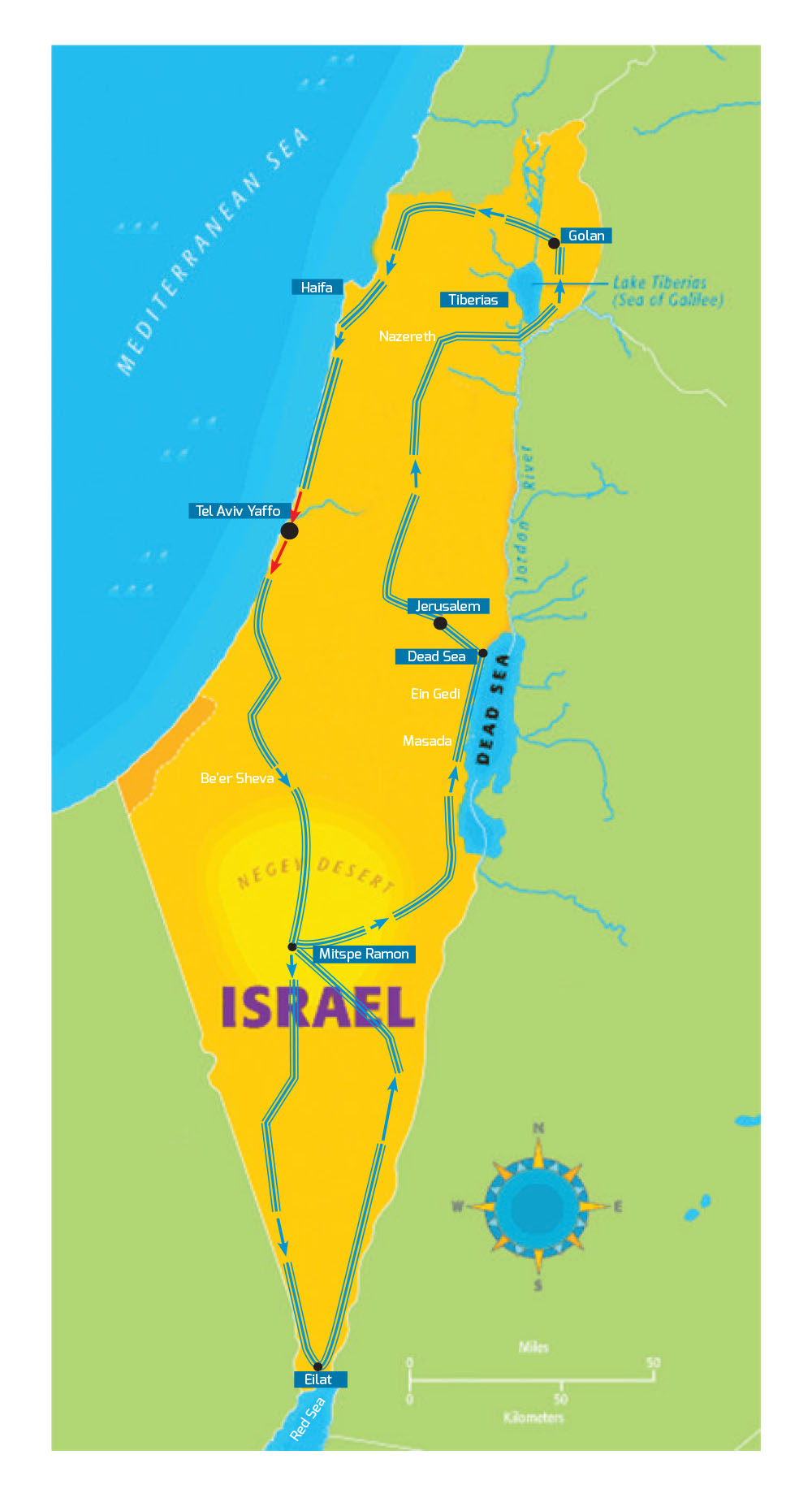